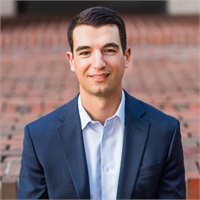 Parker Gerard began his career with Evolve Advisor Group as an intern in May 2015. He loved his intern experience so much so, that he decided to join the team full-time after graduating from the University of Central Florida (UCF).

Parker specializes in the private wealth management side of the firm and spends most of his time analyzing investments, creating financial plans, and servicing clients. His desire to be a financial advisor was born out of his love for finance and helping people.

Parker graduated from UCF with his Bachelor of Science in Business Administration with a major in Finance. He holds his 2-15 state insurance license as well as his Series 66 – Uniform Combined State Law, and Series 7 – General Securities Representative licenses. He’s currently working toward his Chartered Financial Analyst designation.

Parker grew up in Naples, FL, but moved to Orlando in 2012. Outside of the office Parker enjoys fishing, golfing, and playing guitar at H2O Church. He’s also a member of the CFA Society of Orlando.